JUMP TO A DIFFERENT SET:

We usually ship within 24 business hours. Shipping is a flat $5 for all US Domestic orders. Free shipping on orders over $100.

We usually ship within 24 business hours. Shipping is a flat $5 for all US Domestic orders. Free shipping on orders over $100.

Sinking in cyan // The ever expanding skies // Closing in on us.

These magnetic spheres are the color of the bluest sky, a polished aquamarine stone, the best sculpture you've created. They look like Saphira from the book Eragon, but not the movie, because seriously what was that? Cyan sounds really exotic, and is a color a lot of people have never heard of. Friends will see these and be like “Whoa, what are those?” And you’ll be like “Cyan Neoballs”, and they’ll be really impressed because you know about colors that they don’t, and you’ll look really smart, and you are really smart, and you deserve that recognition. So pick up a set of Cyan neodymium magnet balls from Zen Magnets. Not only are they bright and beautifully colored, they also offer increased longevity, a warmer initial touch and softer contact sound when connected.


The colors on these neodymium magnetic balls won’t fade with soft abrasion and if used gently, the coating can last for years. The matte texture diffuses reflections, but is still slippery smooth to the touch.


The coating is strong & thin, incomparable to any coating except our Electro Neoballs. Polymer coatings are too precious to withstand high speed impacts, or rough kneading. Not susceptible to oxidation, rusting, tarnishing, and moisture erosion, this coating is very strong. Okay shape and size consistency of magnets. The size variance of these magnets is ± 0.05mm. Currently, this is the tightest tolerance available for this style of magnet. Some shielding to collision, scraping, hitting and dropping. These magnets will not withstand high speed impacts, collisions, or rough kneading without chipping or denting coating. Neoballs are premium sculpture magnet spheres by the Zen Magnets Company. 5mm diameter, n35 grade neodymium, all Coated Neoballs feature a ± 0.05mm tolerance. Due to our constant struggle for perfection, colors may vary slightly from batch to batch. We are the last American magnet sphere company, and the only one still fighting for the right to sell High Powered rare earth magnet sets in the US. Buy your balls from a company with balls - purchase Cyan Neoballs now!

The paint chips which is a pain but pretty ok

My grandson loves them. He 9 and spends a lot of time creating. 😊

The original sets of 864 and 216 balls are good quality. We bought a set of 18 in order to replace a few lost ones, and those are of such inferior quality that the color wears off right away. You could tell the color was different to begin with. Very disappointing.

I bought a bunch of these of various colors as gifts last year, but of course I played with some of them myself, first. If you've played with the regular Zen magnets or mix the sets, you can immediately detect the tolerance difference--which they call out clearly on the website. They made perfectly fine gifts, though: the recipients weren't what you'd call aficionados.

I noticed that some of the balls were not completely coated, or had spikes or other flaws in the coating. There were maybe 5-10 such balls per set. Some colors were worse than others; one color actually had no defects, but I don't remember which.

I suspect I could have complained, but time was short, and I didn't try. I read somewhere that they have since "improved" the coating, so it could be that newer ones are better. I considered buying one of the rainbow sets this year, because I like the idea of adding some color to my mandala set, but the coupon code they sent me didn't work (I was traveling, and I think I waited too long). 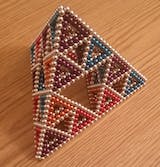